The Chinese military has blasted the US and Canada for sending their warships through the Taiwan Strait, claiming such stunts jeopardize regional stability, after Beijing itself staged beach war drills in a nearby province.

The United States and Canada colluded to provoke and stir up trouble… seriously jeopardizing peace and stability of the Taiwan Strait.

The Pentagon meanwhile insisted that “Dewey’s and Winnipeg’s transit through the Taiwan Strait demonstrates the commitment of the United States and our allies and partners to a free and open Indo-Pacific.”

Beijing considers Taiwan to be a part of its territory under its ‘One China’ policy and does not recognize its autonomy. Amid the escalating war of words, the Chinese military posted a video last week of its troops practicing beach landings, assault drills and building beachheads, conducted in the southern part of Fujian province right across the straits from Taiwan. In response, a military official in Taipei vowed that the island “will meet the enemy full on” in case of conflict. 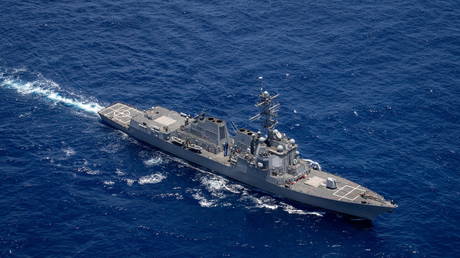 ‘Blow to US strategic superiority’...