Flooding in Neijiang, Sichuan province, has prompted authorities to move tens of thousands of residents out of the area. There are fears that the natural disaster may also damage an ancient statue of Buddha.

Heavy rainfall caused the Yangtze river, which runs through the province, to overflow, leaving countless people stranded by the rising floods. Beijing deployed the military to help evacuate residents and provide aid.

Sichuan has raised its emergency response to the maximum level, and the Yangtze Water Resources Commission, which oversees the river, issued a red alert and said water was likely to rise five meters above flood-protection levels.

Photographs show apartment buildings submerged in muddy water, as people in small boats paddle to safety. In total, more than 100,000 people are being evacuated from the area.

Floodwaters also threaten the 71-meter (233-foot) Leshan Giant Buddha, a UNESCO World Heritage site in the southwest of the province. Police and volunteers used sandbags to try to protect the 1,200-year-old statue, which is carved into the side of a cliff. 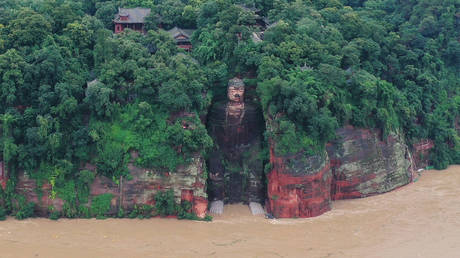