The specific details of the new legislation, which is aimed at dealing with separatism, subversion, terrorism, and collusion with external forces, are yet to be made public.

Tam Yiu-Chung, Hong Kong’s sole representative to the Standing Committee of the National People’s Congress, confirmed on Tuesday that punishments for non-compliance will not include the death penalty.

However, it remains unclear whether the law will be applied retroactively.

“We hope the law will serve as a deterrent to prevent people from stirring up trouble,” Tam said, adding that Hong Kong should not be “used as a tool to split the country.”

A study by the Hong Kong Public Opinion Research Institute showed that 57% of the public opposed the law. Commenting on the survey, Tam said that “it’s meaningless to include dissenting voices. They have been opposing such legislation for more than 20 years.” China had to make a decision as a matter of national security, he stressed.

The controversial law will come into effect on July 1, which marks the 23rd anniversary of Hong Kong’s handover to China from British rule.

As part of international pressure efforts, on Friday the US announced visa restrictions on Chinese officials “believed to be responsible for, or complicit in” undermining Hong Kong’s autonomy. The Chinese Foreign Ministry announced visa restrictions for US individuals in response. Beijing has previously denounced US actions and rhetoric on Hong Kong as “interference” in China’s internal affairs.

Britain also expressed its worries about the national security legislation, describing it as a “grave step,” with Foreign Secretary Dominic Raab saying London was “deeply concerned” by reports that Beijing had passed the law.

The legislation was proposed in late May during China’s annual parliamentary meeting. It sparked protests in Hong Kong over fears that the territory’s freedoms would be restricted. 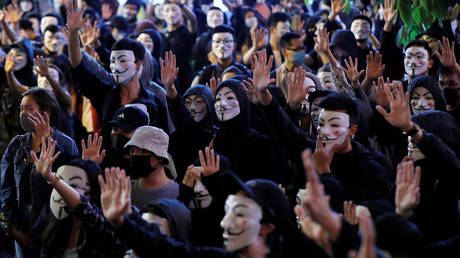