Beijing might be plotting a first strike attack on the US, which would target the country’s electric grid with a large electromagnetic pulse (EMP), sending it into a massive blackout, a new report warns.

An analysis of the alleged Chinese attack plan was recently released by the EMP Task Force on Homeland and National Security – a non-government organization with a stated goal to bring together “citizens, engineers, field experts, and others” to reinforce the American power grid.

According to the report, penned by the group’s executive director Peter Pry, China will not shy away from launching a nuclear first strike against the United States, despite claiming to be bound by ‘No First Use’ (NFU) policy. Pry dismissed these assurances as mere bluffing.

China’s alleged nuclear ‘No First Use’ doctrine, like the USSR’s during the Cold War, is almost certainly disinformation

The ‘No First Use’ policy simply “does not withstand the test of common sense,” Pry argued, pointing out that China’s early warning capabilities lag far behind both that of Russia and the US, slashing its chances for a proper tit-for-tat attack.

China first renounced the idea of using nuclear weapons unless attacked back in the 1960s, while the USSR followed suit in the early 1980s. The United States, in contrast, has refused to adopt a similar policy, insisting on its “right” to nuke its adversaries if a conflict breaks out.

According to the report, Beijing plans to hit the US with EMP weapons which would fry the country’s electric grid, sending it into chaos and facilitating an all-out attack. The “Super-EMP” weaponry was developed in China “based on design information stolen from the US nuclear weapon labs,” Pry alleged. The US, as well as the USSR, tested such devices back in the 1960s.

EMPs use low-yield nuclear warheads, designed specifically to maximise electromagnetic emissions rather than physical destructive power, but China classifies them as cyber weapons, the report claims.

China has allegedly developed three methods of delivering EMP weapons to the US, the report states. The first is the most conventional one – using ballistic missiles and then detonating the warheads in the air to produce an EMP wave. The second would involve cutting-edge hypersonic missiles – which China is known to have successfully developed and tested.

The third method is rather futuristic, using space-based nukes – which is currently prohibited under international law. Pry, however, argued that what many now see an implausible doomsday scenario could one day become reality.

“If China is orbiting nuclear-armed satellites for HEMP surprise attack, this would be one of their deepest and best protected military secrets,” the report states.

While Pry’s analysis sounds alarms about China’s alleged intent to weaponize space, it is the Trump administration and the Pentagon who have actively pushed to militarize the final frontier, declaring outer space a legitimate domain for combat and creating a brand new Space Force.

The report may come in handy for Washington, which has been busy at work blaming others – including  Russia – for its own actions, insisting that American adversaries plan to send weaponry into space. Moscow has repeatedly called on the US to abandon its militarization of space, arguing that it will only further destabilize global security 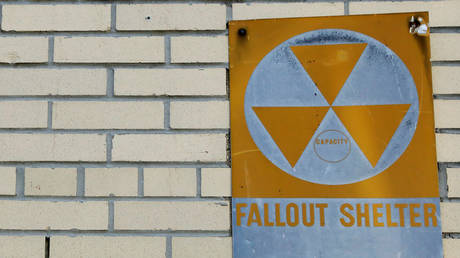