China’s National Development and Reform Commission (NDRC) has said the country is aiming to increase the amount of urban household waste it reuses by 50% as Beijing targets a holistic approach to climate change.

The NDRC admitted on Thursday that the country had failed to meet some of its 2016-2020 targets for waste management, adding that half of cities had not built incineration plants and others had failed to hit targets on treating hazardous waste.

Authorities have been struggling to handle the increasing quantity of trash produced by China’s 1.4 billion people, a feature which has been exacerbated by heightened consumption of consumer goods in recent decades. In 2019 it was estimated that China had built up a backlog of 70 billion tons of solid waste which required treating.

In 2020, China’s urban waste handling capacity reached 1.27 million tons a day, a sizeable jump from 2015. The commission said more resources would be allocated to help China reach its ambitious 2025 goal. By 2025, China wants to reuse 60% of its urban household waste, which would mark a 50% increase from 2020 levels.

In an effort to reduce household waste, Beijing is currently introducing regulation to limit the availability of single-use plastics and will encourage citizens to sort out their trash to enhance the efficacy of waste treatment.

In 2019, Shanghai introduced strict rules on sorting waste, even making citizens separate chicken and pork bones and place them in separate bins. Those who don’t comply face steep fines.

Building on earlier initiatives, at the end of April China adopted new legislation to combat food waste. The new laws ban online videos of binge-eating and introduces fines for diners who leave excessive volumes of uneaten food at restaurants. 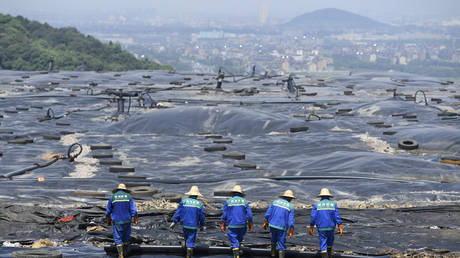 How to avoid being blocked by What...