Beijing urged the United States to stop its “unprovoked attacks,” after Secretary of State Mike Pompeo lashed out at China during a meeting with Australia, India, and Japan aimed at countering China’s growing regional influence.

“Pompeo has repeatedly fabricated lies about China and maliciously created political confrontation,” the Chinese embassy in Japan said on Wednesday.

We once again urge the US to abandon its Cold War mentality and ideological prejudice, [and to] stop unprovoked accusations and attacks against China.

During a visit to Japan on Tuesday, the US’ top diplomat defended the united policies of the so-called “Quad nations,” which also include Australia and India, to counter China’s increasing “influence” in the region.

The Quadrilateral Security Dialogue is supposed to ensure a “free and open Indo-Pacific” and find ways to enhance cooperation on maritime security, cybersecurity and data flows, quality infrastructure, and counterterrorism, according to the US State Department.

At the meeting, Pompeo told his counterparts it was more critical now than ever for the regional allies to collaborate against China’s “exploitation, coercion and corruption.”

Regional states should understand “the challenges presented by the Chinese Communist Party,” Pompeo told Japanese reporters, adding that the global competition is “not a rivalry between the US and China,” but one “for the soul of the world.”

In a separate statement on Tuesday, Beijing’s embassy in Washington responded by saying that China would not “accept reckless smearing and groundless accusations.” Beijing is committed to resolving differences with other countries through dialogue and consultation, a spokesperson said.

Any multilateral cooperation should not be conducted “by forming exclusive blocs,” the embassy spokesperson told Newsweek. The diplomat called on the Quad states “to bear in mind the common interests” of the region and to contribute to peace and stability, “not to the contrary.” 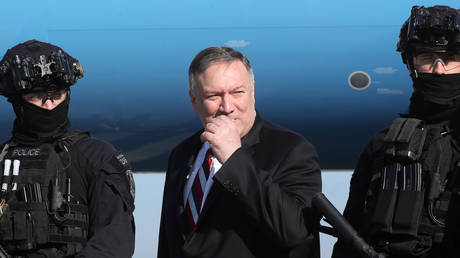