An astronaut aboard the International Space Station has shared a selection of photographs revealing the reverse view of the annual ‘ring of fire’ solar eclipse and showing the resulting shadow passing over our planet.

NASA astronaut Chris Cassidy shared his astounding shots from space on Twitter on Sunday and commented that flying above the Earth was a “pretty neat way” to wake up on Father’s Day.

The photographs reveal what it is like to view an eclipse from outer space. Instead of blocking out the view of the Sun – as it appeared from our perspective on the ground – an interstellar inspection of the event reveals a Moon-shaped shadow cloaking part of the Earth.

Super cool view of the Annular Solar Eclipse which passed by our starboard side as we flew over China this morning. A pretty neat way to wake up on Father’s Day morning! Hoping all of the dads in the world have a wonderful day! #Eclipse #FathersDay #HappyFathersDay2020 pic.twitter.com/vJx5yOFAcb

Cassidy’s post was also somewhaat reminiscent of the legendary ‘Earthrise’ shot of our shadow-shrouded planet, taken on Christmas Eve in 1968. The photo, which revealed the world in all its pearly-blue glory, has been heralded as one of the most important images ever taken, and led to international introspection about our collective place in the universe. 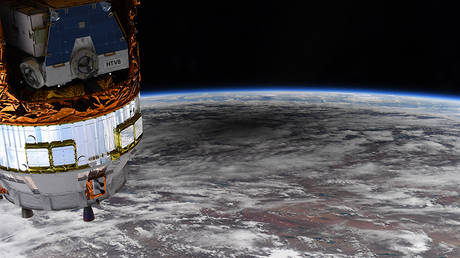