Taliban spokesman Zabihullah Mujahid has rubbished the CBS News interpretation of his words. The network provoked uproar claiming that the militant group wants Trump to win the election and withdraw troops from Afghanistan.

The “clarification” from the Taliban spokesman came hours after a report that the militant group threw its weight behind Trump set Twitter alight, with the president’s detractors seizing upon the unusual endorsement to tear into the Trump administration.

“US news outlet @CBSNews has interpreted & published my remarks incorrectly. Nothing of the sort has been communicated as publicized by them,” Mujahid tweeted.

#Clarification
US news outlet @CBSNews has interpreted & published my remarks incorrectly. Nothing of the sort has been communicated as publicized by them. https://t.co/1DUnrQw9M0

In its report on Saturday, CBS News claimed that Mujahid told them in a “phone interview” that he hopes Trump would prevail over his Democratic rival, Joe Biden, in November, and stick to the withdrawal plan, agreed as part of the deal with the Taliban earlier this year.

“We hope he will win the election and wind up U.S. military presence in Afghanistan,” CBS News cited Mujahid as saying.

In another quote, CBS News attributed to Mujahid, the Taliban spokesman was cited praising Trump’s “America first” motto. “It is the slogan of Trump from the start that they are not cops for the world and don’t want a single flag and anthem for the globe, but their priority is America,”  Mujahid allegedly said.

It’s unclear what exactly in the CBS News “bombshell” prompted Majahid to accuse the channel of twisting his words, since he has not elaborated further.

While the alleged Taliban’s endorsement has seen Trump’s critics declaring an open season on the president, his own campaign was quick to reject the apparent accolade.

“The Taliban should know that the president will always protect American interests by any means necessary,” Trump’s campaign spokesman Tim Murtaugh said.

Under a deal with the militant group, the US agreed to a complete withdrawal of combat troops by spring 2021, pulling out forces in stages as the Afghan government works toward a long-term ceasefire with the Taliban. Trump has always rallied behind a full withdrawal of forces, saying as recently as Wednesday that all US soldiers in Afghanistan could be home by Christmas, although this timeline appears to be at odds with that of the US military brass. 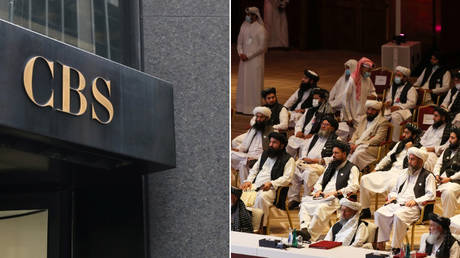