A 100-year-old statue of a black king has been banned from the nativity display of a cathedral in southern Germany after some in the parish called it “racist and disgusting”. Others, though, say it shouldn’t be removed or hidden.

The Evangelical Church District of Ulm in the south of the country announced on Sunday that it would remove the three Wise Men from Christmas displays at Ulm Cathedral this festive season. The statues include the figure of King Melchior, whose dark black skin, large red lips and hunched posture have been called “racist.”

The move comes amid an on-going race debate in Germany, which recently saw calls for an investigation into racism within the country’s police force.

The dean of the cathedral, Ernst-Wilhelm Gohl, said members of his parish had labelled the wooden carving as “disgusting and racist.”

He said: “The wooden figure of Melchior, for example, with its thick lips and misshapen stature, is clearly to be seen as racist from today’s point of view.”

A spokesperson for the Initiative for Black People in Germany welcomed the move, saying “it shows that there is now a more consistent approach to racism.”

The tradition for children singing carols to wear black makeup has become more controversial in recent years and takes on extra significance this year in the wake of the Black Lives Matter movement which emerged in the US.

Gohl added: “Everyday racism is far more widespread than some people want to admit. It’s not about banning the black king from the crib. This would truly be racist.”

“It’s about the representation of the black king by the artist. He’s serving racist stereotypes,” the dean added.

Melchior is among 23 figures carved for the ministry’s nativity in the 1920s by Ulm-based sculptor and wood-carver Martin Scheible.

Reacting to the decision, the bishop of the State of Württemberg, which covers Ulm, Frank Otfried July said that “hiding” Germany’s history was not the right way to go.

“To hang something like that or put it away or hide it in a museum, I think it’s the worse way,” he told DPA. “It makes no sense to retrospectively adapt things to our current convictions. You have to explain them and place them in a critical assessment today.”

Gohl said that he wants the community to debate the future for the Melchior figurine, with a full decision to be made “in peace and quiet” in the New Year. 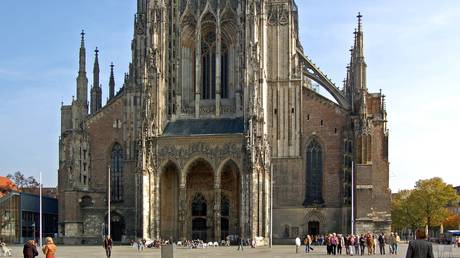