Roger Torrent, the speaker of the Catalan parliament, and Ernest Maragall, the former regional foreign minister, announced they were filing a lawsuit against the former chief of Spain’s National Intelligence Service (CNI) Felix Sanz Roldan, local media reported on Thursday.

Their legal action comes shortly after the Guardian and El Pais suggested the pair’s mobile devices were infected with Pegasus – a hacking tool developed by Israeli firm NSO Group. The papers suggested the spyware was installed following a missed WhatsApp call in 2019 – when Roldan, now in retirement, was in charge of the CNI.

“As of today, the only person we can accuse is the former CNI director,” said Andreu Van den Eynde, the lawyer for both politicians.

Torrent himself told El Pais that “strange things” happened in 2019 when he met with Dunja Mijatovic, the Council of Europe’s commissioner for human rights. His WhatsApp messages and chats disappeared, but it “didn’t happen to the people around me.” He also claims to have received equally “strange” text messages during the same year.

Previously, the Facebook-owned WhatsApp confirmed that roughly 1,400 users around the world had been targeted by Pegasus, among them human rights campaigners and political activists as well as journalists.

The malware quietly seizes control over a target device’s multimedia functions, including its microphone and camera, without the user noticing.

Pegasus is only supplied to governments and state agencies worldwide to fight terrorism and organized crime – a fact that likely lends weight to Torrent’s and Maragall’s suspicions.

The Catalan parliamentary speaker, a staunch pro-independence politician, has bluntly accused Madrid of making use of “political spying” against opponents.

“There had been complaints made by Amnesty International and other entities that states had been using [Pegasus] to persecute political dissidents, including in Morocco, Saudi Arabia and Mexico. And now we know it happens in Spain as well,” Torrent stated this week.

Making the row even more intriguing, El Pais alleged that both CNI and the Spanish Interior Ministry do have ‘Pegasus’ at their disposal – a claim law enforcement agencies have categorically denied. CNI reportedly only says that it will “always act under full compliance with the legal system.”

The prime minister’s office similarly brushed aside the allegations, with a spokeswoman telling AFP it is “not aware” that Torrent and Margall fell victim to a hacking attack. ”In Spain, any intervention concerning a mobile phone is always done legally [through a judicial order],” she said. 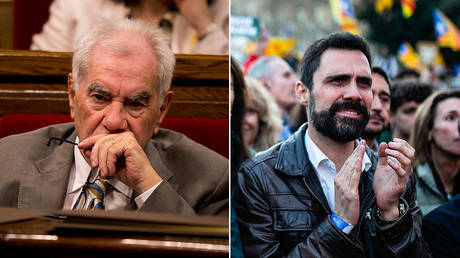 Jeremy Corbyn doubles down on usin...