Close
Trending News
HomeWorldCatalan district with 200,000 residents becomes first in Spain to be put under local lockdown after Covid-19 spike

Catalan district with 200,000 residents becomes first in Spain to be put under local lockdown after Covid-19 spike

Catalan district with 200,000 residents becomes first in Spain to be put under local lockdown after Covid-19 spike

Officials in the northeastern Spanish province of Catalonia have imposed a local lockdown in Segria county, home to tens of thousands of people, after a spike in Covid-19 cases.

Catalan President Quim Torra announced the containment measures in Segria, home to more than 200,000 people, starting from Saturday. It’s the first part of Spain to be subjected to a local shutdown since nationwide restrictions were partially lifted.

The borders of the area around the town of Lerida will be sealed for non-transit and non-essential travel from 16:00 local time, giving people a short window of opportunity to leave the quarantine zone or return to it. Officials have also banned gatherings of more than 10 people and urged elderly and vulnerable people to stay at home.

“The government’s priority is to protect the life and health of people, and it will take all the necessary decisions and measures,” Torra said at a media conference.

He called on residents to observe social distancing and instructed the Catalan Interior Ministry to strictly enforce the rules by fining violators.

There are nine hotspots of Covid-19 in Lleida, with 28 infected people currently being treated in hospital. Segria county has registered 365 new infections in the past week. President Torra said the infection rate was “much higher” than in other parts of Spain, necessitating “extreme measures”. 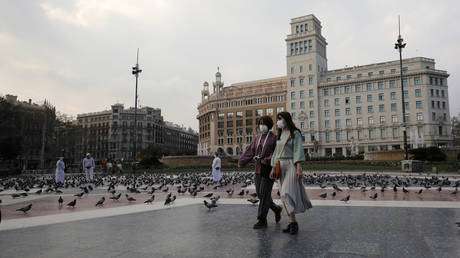