Caravan of more than 3,000 US-bound migrants cross illegally into Guatemala from Honduras (VIDEOS)

Caravan of more than 3,000 US-bound migrants cross illegally into Guatemala from Honduras (VIDEOS)

Over 3,000 migrants have crossed illegally into Guatemala from Honduras while heading towards the United States. Some groups of migrants were able to force their way through border checkpoints, footage shows.

The large congregation of migrants heading from Central American countries to the US crossed into Guatemala on Thursday, local officials said.

Members of the group arrived at the border early in the morning and by midday more than 3,000 of them illegally entered the country, Guatemalan migration officials confirmed, appealing for help from their Honduran colleagues.

“[We] ask the Honduran authorities to stop these flows in their territory. This cannot be repeated,” Guatemalan director of migration, Guillermo Diaz, told Honduran HRN radio. The official said more migrants are on their way towards the country, with a second group expected to reach the border tomorrow.

A crowd about 1,000-strong has forced its way from the Corinto crossing point, footage circulating online shows. While the checkpoint was manned by armed border guards, they were unable to push the crowd back into Honduras. As they rushed through the border, the guards apparently simply stepped aside to avoid being trampled.

A large caravan of Central American migrants fleeing pandemic-induced poverty has pushed into Guatemala en route to Mexico and the U.S. This video recorded by @MigracionGuate officials at Corinto. pic.twitter.com/q6fPc6GuRi

While migrant caravans have repeatedly crossed through Central America in attempts to reach the US, the current group is the largest one since the coronavirus pandemic struck the region in March. Like elsewhere across the globe, the coronavirus has heavily hampered travel in Central America, including that of illegal migrants. 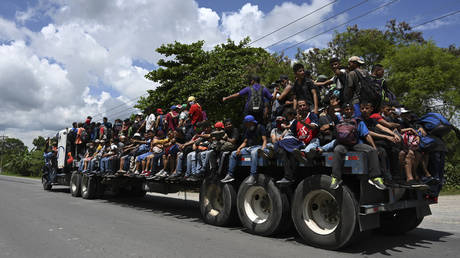