A car covered with messages has crashed into the gates of German Chancellor Angela Merkel’s office in Berlin ahead of a meeting where the extension of Germany’s coronavirus lockdown was set to be discussed.

Photographs from the scene reveal messages including “Stop Globalisation Politics” and “You damn killers of children and old people” were written across the side of the vehicle.

There were no immediate reports of casualties in the aftermath of the incident. Dozens of emergency responders attended the scene and armed police officers and police dogs inspected the Volkswagen estate following the crash.

The driver of the car, who appeared to be in late middle age, was taken away from the scene in a wheelchair. “We are establishing if the driver deliberately drove against (the gate),” Berlin police said on Twitter. “He has been taken into custody.”

A police spokesperson said they do not believe the incident was an extremist attack.

The German leader was scheduled to host a video conference of German state premiers on Wednesday morning, at which an extension to the coronavirus lockdown and further steps to combat the pandemic were set to be discussed.

The office is well set back from any main roads. It is located in the center of Berlin across a square from the Reichstag building that houses the German parliament. 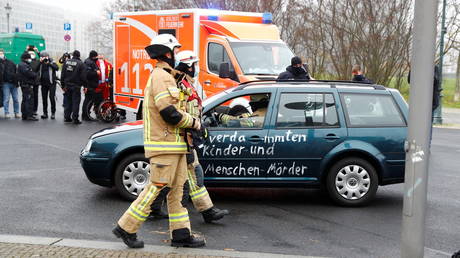