Three gunmen caught by the Syrian Army have told Russian media they were part of a US-backed militant group and had been sent on a spying mission in the Raqqa governorate.

The detainees were shown to journalists near the city of Palmyra, where they were delivered by the Syrian army.The three men claimed they belonged to the Revolutionary Commando Army, a militia group based around the US base in Al-Tanf in southeastern Syria.

According to the detainees, they left Al-Tanf on motorcycles and rode north for a reconnaissance mission in the Mansoura subdistrict of the Raqqa governorate. Upon reaching their destination they were supposed to look for Syrian, Russian and Iranian facilities.

They avoided major roads to dodge Syrian checkpoints and patrols. But their guide, a smuggler by trade, made an error and led them into a minefield, where he, the group leader and a fighter died. Three of the five survivors were soon captured by Syrian troops, the detainees said.

The Syrian military presented Kalashnikov assault rifles, hand grenades, IDs, money and stimulating drugs, which they said the group possessed at the moment of capture. as well as the wreckage of two motorcycles presumably recovered from the minefield.

The Revolutionary Commando Army, or Maghawir al-Thawra (MaT), is one of many anti-government armed groups in Syria that have received support from Washington. It was formed in 2015, presumably to fight the terrorist group Islamic State (IS, formerly ISIS). At the time, they claimed they received advanced weapons and CIA training in Jordan.

Today the group is reportedly reduced to a US-backed militia force that provides additional security for the Al-Tanf military base.

One of the detainees said he was recruited into MaT from Rukban, a nearby refugee camp, where he worked as a baker. He got basic military training from American instructors, he said. 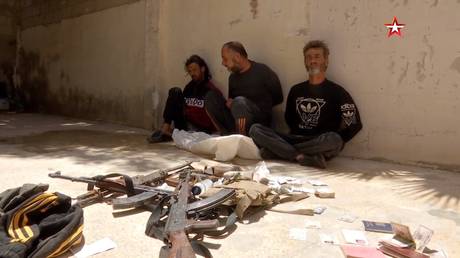