Canadian PM Justin Trudeau has been duped by Russian pranksters pretending to be Greta Thunberg, commiserating with her about geopolitics and world leaders, and promising to introduce her to Terrance and Phillip.

Pranksters Vladimir Kuznetsov and Alexey Stolyarov, also known as Vovan and Lexus, connected in a 10-minute phone call with Trudeau in January, after a Ukrainian airliner was shot down in Iran. A recording of the conversation between Trudeau and a voice posing as the acclaimed child environmentalist, was posted to Vovan and Lexus’s YouTube account on Monday.

Trudeau tried to assure fake Greta that he was doing his best to “de-escalate” international tensions following the airliner tragedy. “I’m asking you to impact on (President Donald) Trump and NATO, so they will lead to the fact that not only the future, but the present will be stolen from us,” fake Greta said.

“Indeed. We are balancing many different things in Iraq,” Trudeau said. “There’s an understanding that yes, there are real questions around the international community and the American engagement and their actions, while at the same time there is a recognition that in the fight against terrorism, in the fight against ISIS, Daesh, there is a need for international military presence, including the Americans, to ensure stability in the region.”

Not satisfied, fake Greta retorted: “You are adults, but you act like children.” She went on to speak of a more loving world, “where there is a place for everyone – for whites and blacks, Christians and Muslims, for Trump and (President Vladimir) Putin, for you and me, for Boris Johnson … for Terrance and Phillip.”

The Terrance and Phillip reference was to the Canadian comedy duo who star on the animated South Park show. Trudeau either missed or ignored the reference and praised fake Greta for having “exactly the right perspective.” He thanked her for visiting Canada last year and helping his party to win the election by making clear the need to be “thinking more about young people.”

Trudeau again offered a sympathetic ear, saying, “I also dream of a world in which soldiers are not necessary, but we don’t live in that world yet, unfortunately, and it does take people to push back against those who would harm innocence. But I very much appreciate your passionate words and reflect always on how we can use many different paths to push toward the path to peace.”

“The main bastard is Trump because Mr. Trump is doing everything to kill us,” fake Greta said. Trudeau pointed out that he must work with “the world leaders that other people choose,” but added:

I can certainly understand that people can feel very, very strongly about him.

At that point, fake Greta invited Trudeau to join her private club for “politicians, presidents, heads of government who support me and so, the world’s rules must be changed.” Trudeau said he would need to learn more about the club and asked fake Greta to send him an explanation.

Fake Greta also urged Trudeau to take care of her friend Prince Harry if and when he moved to Canada. The prime minister responded that Harry is “absolutely one of the good guys” and said he looked forward to spending time with him.

“But I sometimes think that his wife manipulates him,” fake Greta said. Trudeau again tried to comfort her, saying “there are complicated concessions and compromises” in every relationship and that Harry’s wife, Megan Markle, “has always been lovely when I’ve met her.”

The wheels finally began to come off when fake Greta again brought up Terrance and Phillip, asking Trudeau to introduce her to them.

I will ask my team to figure out how we can connect you… I don’t have their direct coordinates with me now.

When she again asked for an introduction, he said, “Wait, Terrance and Phillip, were they not in South Park?” Fake Greta replied that she didn’t know, to which Trudeau said, “I appreciate your request. I don’t personally know them. I believe they are South Park parodies of Canadians.”

Trudeau then thanked fake Greta and quickly wrapped up the conversation, probably starting to suspect something at that point, but nevertheless saying he looked forward to speaking with her again soon.

The YouTube video was the latest episode in a series that Vovan and Lexus calls “Stars Save the Earth.” The pranksters, posing as various characters, have also managed to dupe such well-known figures as Prince Harry, French President Emmanuel Macron and US Senators Bernie Sanders, Kamala Harris and Lindsey Graham. 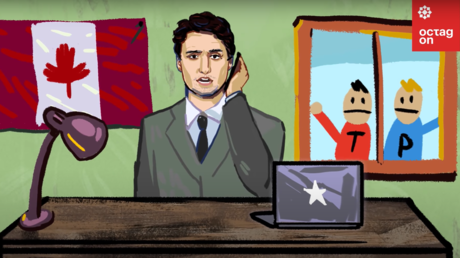