Desecration of the Koran by burning or kicking the book is not a hate crime in itself, a Swedish prosecutor has said, as investigations into two anti-Islam protests, which had triggered Muslim rioting in Malmo, were dropped.

Swedish authorities have decided to close preliminary probes into the actions of a far-right Danish political party, which caused rioting in the city of Malmo in August. The members of Stram Kurs (‘Hard Line’) were suspected of inciting hatred against an ethnic group. But prosecutors said the burning and kicking of copies of Islam’s holy book did not constitute a hate crime.

The two controversial stunts took place on Friday, August 28. The burning was staged and filmed in the Emilstorp neighborhood, while the kicking action, which organizers dubbed “Koran football,” happened shortly afterwards in the Stortorget square. Swedish police eventually arrested three party members on suspicion of inciting hatred. The videos of the two protests outraged the local Muslim community, triggering rioting in the city.

While desecrations of the Koran in itself did not constitute a hate crime, some of the chants that could be heard during the kicking session could be considered as such, Malmo prosecutor Sofia Syren told the newspaper Sydsvenskan on Monday. But investigators failed to identify who shouted these, making prosecution impossible. So last week the probes were closed.

The riots themselves, however, have left a more reliable body of evidence, it appears. Last week, six people were charged with various crimes related to the spree of violence. A 31-year-old man got busted thanks to videos he himself filmed and published on TikTok during the rioting. The five others are all teenagers, including four 16-year-old boys and a 17-year-old girl. Prosecutor Tomas Olvmyr said more indictments were likely to follow.

The Malmo rioting involved an estimated 300 participants, who vandalized property and clashed with the city police, leaving 15 officers injured and causing an estimated $465,000 in damage, most of it done to police vehicles.

Ironically, the person who instigated the Koran-defiling stunts in Malmo, didn’t participate in them personally. Rasmus Paludan, the head of Stram Kurs, was banned from entering Sweden for two years before the protests and got arrested for violating it before he could join fellow party members. Last week he was taken into custody again in Paris, as he was preparing to stage yet another Koran-burning near the Arc de Triomphe. He was ordered to leave France. 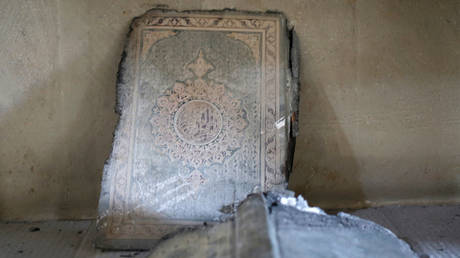