In order to combat the recent surge in coronavirus infections, Bulgaria will close gyms, restaurants, schools and shopping malls until December 21, with the restrictions starting on Friday evening.

Prime Minister Boyko Borissov announced the measures on Wednesday morning, over concerns that the country’s health system could become overwhelmed.

To ease the pressure on hospitals that are on the brink, we are introducing measures for three weeks.

Gyms, restaurants, schools and shopping malls will be closed, private gatherings will be limited to 15 people and tourist trips domestically and internationally will be prohibited. However, smaller shops will be allowed to remain open, sports events can take place without crowds and theaters may stay open if they operate at 30-percent capacity.

In order to support employees and businesses during the new lockdown, Labor Minister Denitsa Sacheva announced that the government will provide the equivalent of $30.4 million in financial aid, bringing the total amount made available during Bulgaria’s epidemic to $243.3 million.

Despite the lockdown, the Minister of Health Kostadin Angelov has claimed that the government is working to ensure that every effort is made to weaken the restrictions in time for families to gather for Christmas. However, he did not provide specific details, stating that authorities will need to wait for two weeks to see whether the newly imposed measures have had a positive impact.

The restrictions have been met with some opposition in the country; several hundred people protested against the new measures and demanded the government resign over its perceived failure to reform the education and health system.

While Bulgaria managed to control the first wave of the epidemic, it has experienced a spike since September, recording 3,146 new infections on Wednesday, bringing the total number of confirmed cases to 124,966.

Bulgaria has the EU’s third-highest rate of Covid-19 deaths per 100,000 people over the past 14 days, behind Belgium and the Czech Republic. The country has reported 3,069 deaths since the pandemic begun. 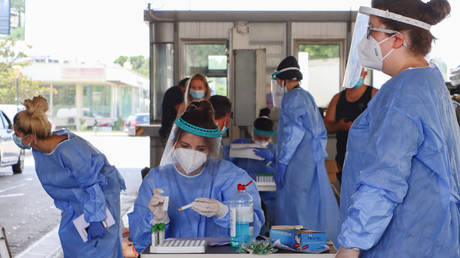