The European Commission has reminded the French government of its duty to ensure journalists can carry out their work “freely and safely,” as parliament votes to crackdown on the publication of images of on-duty police officers.

Christian Wigand, the EC spokesperson for Rule of Law, issued a warning to the French government after parliament voted to approve a law penalizing journalists for disseminating images of the police on Friday.

The spokesman told AFP that the EU body is monitoring developments in France very closely.

The Commission is refraining from commenting on bills, but it goes without saying that in times of crisis, it is more important than ever that journalists can do their work freely and safely.

Wigand added that EU member states must make sure they find the right balance when drafting security legalization, ensuring citizens’ rights and, notably, media freedoms are not compromised by the need to reinforce public security.

“As always, the Commission reserves the right to examine the final legislation to verify its compliance with EU law,” he added.

Following initial approval on Friday, French MPs are scheduled to vote on the bill as a whole on Tuesday. After this, the bill will then go to the Senate, France’s upper house. If approved, the law will expand the use of surveillance drones and police powers, as well as limiting the publication of images of on-duty police officers.

According to the bill, sharing images of on-duty cops “with the aim or harming their physical or psychological integrity” will become punishable with a year’s imprisonment and a maximum €45,000 ($53,360) fine.

The bill has been met with fierce opposition from journalists and activists who say civil liberties and press freedom could be compromised.

Thousands took to the streets to protest against the new measures last week and over the weekend. On Saturday, police utilized water cannon to break up a demonstration in Paris organized by Reporters without Borders and Amnesty International.

The government has denied reports that it’s attempting to limit press freedom. Interior Minister Gerald Darmanin has previously said the aim is to “protect those who protect us.” 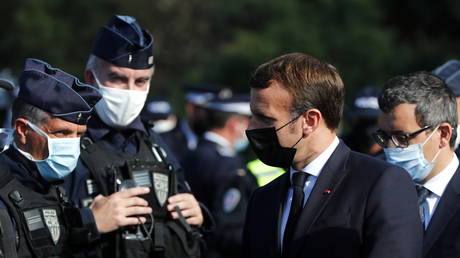 Lockdown WILL end on Dec 2 but Bor...