With Covid-19 cases soaring in the Belgian capital, the premier of the Brussels region, Rudi Vervoort, has announced that bars and cafes will have to close for one month starting from Thursday.

The regional government is taking additional steps to tackle the coronavirus pandemic as cases continue to rise in the Brussels-Capital Region, Minister-President Vervoort told a news conference on Wednesday.

From Thursday, all bars and cafes will have to shut their doors, while restaurants will remain open. The minister-president claimed the new restrictions were not about alcohol, as even establishments that don’t serve it will have to close. “Serving alcohol is not the criteria here,” he said. The measures announced also forbid drinking alcohol outdoors.

Following the lead of their Parisian counterparts, the Brussels government has made a concession to keep restaurants open, stipulating that they can remain open if they respect the 1.5 meter social-distancing rules. The same measures apply for sports facilities. One political commentator joked about the tendency for the Belgian authorities to follow the French lead on Covid-19.

During the lockdowns there’s been a running joke that Belgium does the same thing as France, but a few days later and not very well.

Further measures may be announced later in the week, as authorities plan to meet on Friday to decide whether to close schools and universities. Similar measures have been introduced in the Czech Republic.

Brussels is now one of the worst cities in Europe for Covid-19 infections per inhabitant, second only to Madrid among the EU’s 27 capitals. Health authorities announced on Wednesday that in the last two weeks there were 502 coronavirus cases per 100,000 residents in the Belgian capital.

The whole nation was subjected to further restrictions on Tuesday following an announcement by the Belgian government. The new nationwide measures limit the opening times of bars and pubs and restrict socializing to groups of four people. 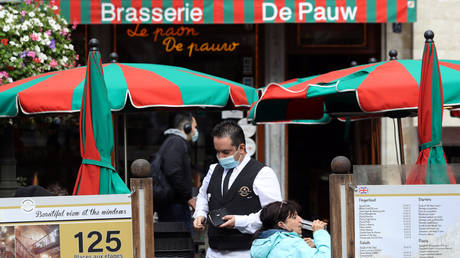