Brazilian President Jair Bolsonaro has revealed he has tested positive for the coronavirus. Bolsonaro, who has been criticized for downplaying the virus, was tested on Monday after developing symptoms including a fever.

The bombshell revelation was made by Bolsonaro during a televised interview on Tuesday. The president said he started feeling unwell over the weekend, adding that he is being treated with antibiotics and the anti-malaria drug hydroxychloroquine.

Bolsonaro is among the most skeptical world leaders about both the severity of the coronavirus and restrictive measures aimed at curbing the pandemic.

The president has been at odds with the health authorities of his own country, having publicly defied social distancing, repeatedly refused to wear a mask, and argued that lockdowns only hurt the economy.

Late in June, a Brazilian court ordered the president to wear a mask and comply with federal guidelines. The order was overturned on appeal, with the judge saying it was unnecessary because face masks are already mandatory in Brasilia.

Despite contracting the disease which has killed over 500,000 people worldwide, Bolsonaro appeared unconcerned.

“There’s no reason for fear. That’s life,” he said. “Life goes on. I thank God for my life and the role I’ve been given to decide the future of this great nation that is called Brazil.”

Brazil is one of the nations worst hit by the coronavirus. With a total of over 1.6 million confirmed cases and more than 65,000 deaths, the country’s Covid-19 outbreak is overshadowed only by that in the US. The testing process has also reportedly been very slow in Brazil, prompting concerns that the number of cases could be much higher than officially reported. 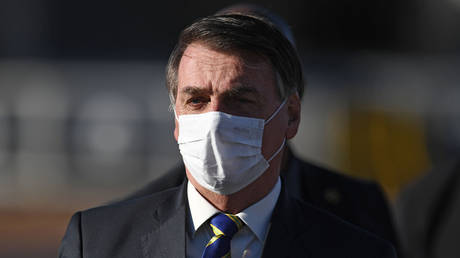 This Google Chrome update can boos...