Brazil’s Bolsonaro bitten by emu while recovering from coronavirus (PHOTOS)

Brazil’s Bolsonaro bitten by emu while recovering from coronavirus (PHOTOS)

Brazil’s President Jair Bolsonaro was posing for a press photo op while in quarantine, feeding emus outside the presidential palace, when one of the belligerent birds bit him – adding insult to injury as he recovers from Covid-19.

One of the giant birds was snapped snapping at the Brazilian president in the grounds of Brasilia’s Alvorada Palace by photographer Igo Estrela.

Despite the ornithological ordeal, Bolsonaro, 65, claimed he was feeling “very well” and had none of the major symptoms associated with the virus – which include fever, respiratory problems and a loss of taste and smell.

However, he clearly does not appear to be enjoying quarantine, and is awaiting follow-up test results following his initial diagnosis last week.

“I will wait anxiously for the result, because I can’t stand this routine of staying at home; it’s horrible,” Bolsonaro told Brazilian media in a telephone interview on Monday.

The controversial commander-in-chief’s woes won’t end there, however, as he is also facing a lawsuit from Brazilian journalists over his lackadaisical approach to wearing a mask during the press conference in which he announced he had tested positive for Covid-19. 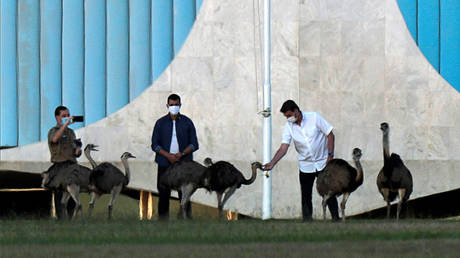