Tens of thousands took to the streets across Brazil, protesting the rule of President Jair Bolsonaro as the country hit the half-a-million Covid-19 deaths mark, blamed on the sloppy government handling of the coronavirus crisis.

The protests took place across most of the major Brazilian cities, including the country’s capital, Brasilia, on Saturday. The largest rally took place in Sao Paulo, home to over 12.3 million people and the most populous city in the country.

The activists hit the city’s downtown, condemning the government’s overall sloppy response to the pandemic, and Bolsonaro personally, blaming them for the ballooning coronavirus toll. The president is a well-known corona-skeptic, who has repeatedly violated standing mask-wearing and social-distancing rules.

Protesters carried various banners, criticizing the Covid-19 response, as well as addressing other social and economic issues blamed on the right-wing government. The activists unfurled a massive block-sized banner reading “Life, Bread, Vaccines and Education.” One of the protesters was also spotted carrying a placard reading “Half a million reasons to oust Bolsonaro,” an obvious nod to the freshly-reached half-a-million coronavirus deaths mark.

In absolute figures, the country remains among the worst-hit nations in the world with coronavirus tally of nearly 18 million, dwarfed only by the US and India. In terms of its death toll, the country now holds a solid second place.

Many protesters demanded that the government step down, insisting Bolsonaro and other top officials must be held accountable for the Covid-19 crisis, as well as for the sloppy handling of the country’s economy. Cardboard cutouts, showing the president and his ministers in prison robes have been spotted at the event.

“I’m here to fight for a better and fairer country, with education to take out this genocide, this assassin who has killed people and also their dignity. Fifteen million are unemployed in this country, and he is making fun of us,” a protester told RT’s Ruptly.

The deadly virus continues to spread steadily in Brazil, with some 100,000 new cases and around 2,000 deaths reported on daily basis lately. The rather modest testing figures also suggest the situation on the ground might be even worse with many new cases left undetected. 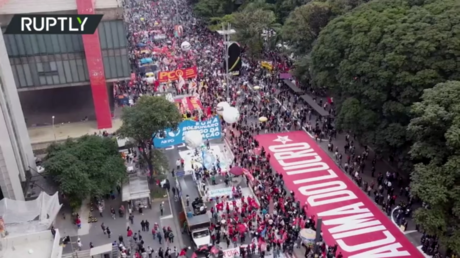