A man has been found “beheaded and eviscerated” in the southeastern French commune of Bollène. A police search is now underway for the suspect, whom they say is armed with a knife and dangerous.

The macabre murder took place in the Vaucluse district of the famed Provence-Alpes-Côte d’Azur tourist region.

Warning that the suspect was armed, the Vaucluse gendarmes posted a mugshot to social media and ordered any residents who saw the man not to confront him. A law enforcement source told the AFP news agency that whether or not the incident was a terrorist act was “not absolute at this stage of the inquiry.”

Bollène’s mayor, Anthony Zilio, described the suspect as “unstable” and informed followers on Facebook that he was believed to be hiding in local woodlands in an area known as Barry.

France terror attack Update 1: Over 86 officers, Hérault gendarmerie helicopter, a team of military dogs and motorcycles are involved in the research.

The residents to stay at home. pic.twitter.com/B8tH5lkIpq

Local media is reporting that a helicopter, a police-dog team, and other resources have been deployed to the area to help in the search for the suspect.

The public prosecutor of nearby Carpentras described there being “blood everywhere” at the scene, according to the radio station network France Bleu. That report and others also indicated that the suspect may be related to the victim, and may have been disturbed with the body on Wednesday, prompting him to flee. 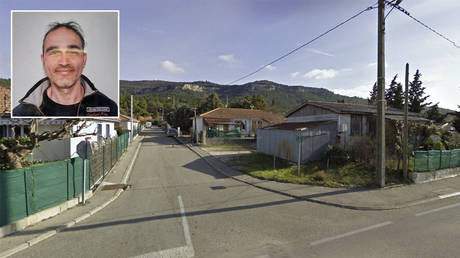