Jeanine Anez, who has been Bolivia’s acting president since the 2019 coup that ousted Evo Morales, confirmed that she has tested positive for the coronavirus.

The revelation comes two days after Brazilian President Jair Bolsonaro announced he had been infected with Covid-2019.

Anez said in a tweet that she was fine and would continue working in isolation.

Backed by right-wing politicians and the US, Anez came to power in late 2019 after Morales, the country’s leftist leader of 14 years, resigned under pressure from top military officials following weeks of opposition protests. He was accused by his rivals of election fraud  following October’s presidential vote, a claim that was later proved false.

Bolivia has over 42,000 cases of coronavirus and over 1,500 deaths in a country with a population of 11.3 million people, according to Johns Hopkins University data. Health Minister Eidy Roca also tested positive for the novel virus a few days earlier.

Bolivia, rocked by political turmoil and financial troubles, is one of the countries where the fewest number of tests were carried out. Its medical system has been collapsing, with people not being admitted to hospitals on time and local media reporting bodies dumped in the streets. The government postponed presidential elections from May till September due to the outbreak. 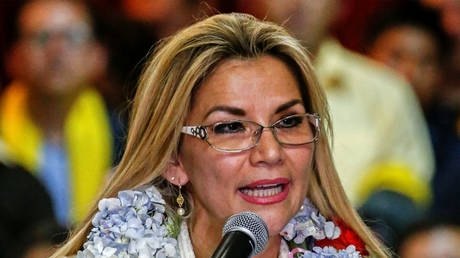