Farmers fired shots and carried ‘Boer Lives Matter’ signs as they stormed a court in eastern South Africa on Tuesday where two suspects were to appear before a judge over the brutal murder of a young farm manager.

Sekwetje Isaiah Mahlamba, 32, and Sekola Piet Matlaletsa, 44, who were arrested on Saturday, were at the Senekal Magistrate’s Court in the Free State on Tuesday morning for a pre-trial hearing.

The two men are accused of killing Brendin Horner, 21, whose body was found on Friday at about 6am local time, tied to a pole at the farm he managed in the town of Paul Roux. He had sustained multiple wounds, and a knife was discovered nearby.

Horner’s death came just days after the killing of 44-year-old white farmer Chantel Kershaw, who was strangled in her own garage on September 30. She was allegedly ambushed by a pair of armed black men, according to witnesses. A neighborhood watch group handed those suspected of her attack over to police.

Tensions boiled over outside the court on Tuesday as thousands of people flocked to Senekal to protest against the killings of white farmers.

Footage shows angry demonstrators tipping over a police van, which was later torched.

SAPS Nyala truck was pushed out by furious Boers after it rammed through the court wall. While the Nyala was inside the court, police units continuously threw the Boers with flashbangs and tear gas.#SAPS #BrendinHorner #Unzensiert #SouthAfrica #Senekal pic.twitter.com/zQor2CVDsB

.@News24 @TeamNews24 As of right now there is NO-COVERAGE of what’s happening in Senekal on your platform. #BrendinHorner #FarmMurders pic.twitter.com/NVp9pIRRmd

Crowds were also pictured gathering by the holding cells containing the suspects, while some protesters clutched signs, including some reading “Boer Lives Matter.”

Other footage appeared to show a convoy of tractors heading to the court, while one video purported to show police hurling a tear gas canister towards protesters.

Police inside a Nyala toss a tear gas canister at Boers protesting in the street then speeds away like a coward.#BrendinHorner #SAPS #Senekal #SouthAfrica #Unzensiert pic.twitter.com/KQx95Xwfrt

Police spokesperson Motantsi Makhele said the court hearing had been postponed to October 16 for a formal bail application. He said the protesting farmers had demanded that the suspects be turned over to them, and had damaged court property as they forced their way into the cells.

“Two shots were fired from this group but no one was injured,” Makhele told TimesLive. “Thus far the situation is tense, but under control.” 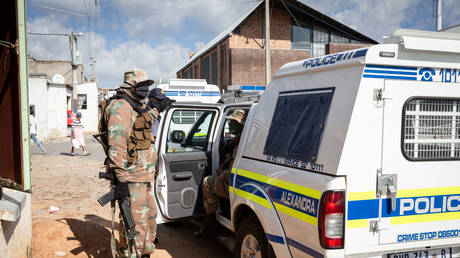