A Turkish military vehicle has been hit by an unidentified explosive device while patrolling a highway in Syria’s Idlib, the Russian center for Syrian reconciliation has said.

The device detonated near a Turkish convoy on the route of the patrol, the center said, adding that no Russian troops had been injured.

Russian and Turkish soldiers have been jointly patrolling the M4 highway in Syria, which connects the provinces of Latakia and Aleppo, since March. No group has so far claimed responsibility for the attack.

Turkish security officials later said there had been an attack that caused material damage but no deaths.

The patrols resumed last week after Russia suspended them over increased militant activity.

“Terrorists have stepped up the amount of shelling on government troops and nearby settlements, not ceasing their provocations in the ‘security corridor’ along the M4 highway,” Russian Foreign Ministry spokeswoman Maria Zakharova said on Thursday.

Moscow and Ankara, which back opposing sides in Syria’s war, began the patrols in March after they agreed a ceasefire in the region. As part of the agreement, the two countries’ forces will establish a security corridor on either side of the highway. 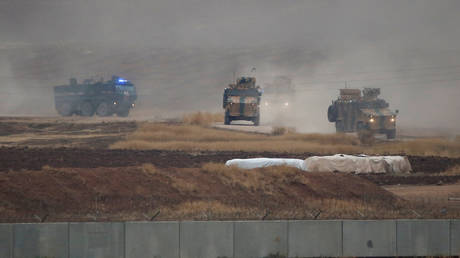