Analysis of a collision between two black holes in a distant region of space has revealed the existence of light, the first time such an association has been made with the phenomenon.

The merging of the two cosmic beasts was reported after a gravitational wave dubbed S190521g was detected in May 2019 by the twin Laser Interferometer Gravitational-wave Observatory (LIGO) facilities in the US and the Virgo observatory in Italy.

Remarkably, the Zwicky Transient Facility (ZTF) at the Palomar Observatory in California, had its telescope focused on the same region of space at the same time – and detected an explosive flare in the vicinity.

The research, published in astrophysics journal Physical Review Letters on Thursday, is the first record of light being associated with the collision of black holes.

The revelation could help prove the existing theory that black hole mergers occur regularly in regions of material known as ‘accretion disks’ surrounding supermassive black holes. Prior to the discovery, black holes were thought to merge in stellar graveyards, where there is little gas or dust that can heat up and glow.

“The expectation has always been that there would be no electromagnetic counterpart” to the merger’s gravitational-wave signal, Matthew Graham, principal scientist at ZTF and first author on the study, explained to CNET.

However, with the existence of a flare and therefore light – which is a form of electromagnetic radiation – it seems that this assumption is incorrect, and that black holes can and do exist in regions with matter that can be heated or lit up.

Accretion disks are intense environments filled with gas, dust, stars and black holes. The research team believed that it was in such a location that the pair of black holes merged, an act that disturbed the surrounding space dust and debris and caused the flare as a result.

“The new merged black hole gets this kick and there’s material dragged along with that. [It] slams into this gaseous environment around it and you get a shock front – that’s the initial cause of the flare,” Graham told CNET.

The LIGO/Virgo collaboration is yet to confirm what type of colossal cosmic event occurred but that, if it was as the researchers suspect, the merged black hole’s mass would now sit at around 150 solar masses, which would be the largest ever recorded. 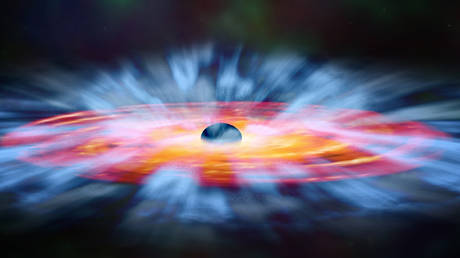 Berlin has no obligation to en...