Irish republicans have found a new and unexpected ally as Amazon’s customer support team unilaterally kicked Northern Ireland out of the UK and declared Ireland united in a hilarious Twitter geography gaffe.

It all started with a rugby fan named Chris Jones, who tweeted the AmazonHelp account on Saturday because he was having difficulty viewing the Autumn Nations Cup rugby tournament on Amazon Prime.

After ruling out possible technical issues, an Amazon employee believed they had discovered the problem: The match was only available to Prime Members in the UK.

“Thank you for that information. We apologize but upon reviewing your location you’re in Northern Ireland. Rugby Autumn Nations Cup coverage is exclusively available to Prime members based in the UK. We don’t have the rights to other territories,” the official Amazon account tweeted.

Amazon said Up the RA 🇮🇪🇮🇪🇮🇪

When Jones responded to inform Amazon that Northern Ireland is part of the UK the retail behemoth doubled down, saying that it doesn’t have broadcast rights for “Ireland or other territories.”

Unsurprisingly, one of the world’s largest companies unceremoniously booting Northern Ireland out of the UK, and declaring Ireland a united island, inspired an outpouring of jokes as Irish people welcomed Amazon to the republican fold.

Comedian Dara O Briain was among those to mock the gaffe, claiming that Amazon has “delivered a United Ireland.”

Amazon Prime have delivered a United Ireland, and before 6pm on the same day. https://t.co/LF567yffC1

The swirl of reactions saw the phrase ‘United Ireland’ trend on Twitter, as references to the “Black Friday Agreement” were widely shared along with pictures of the famous ‘Free Derry’ mural changed to “free delivery.”

Just logging on for my first day on the Amazon Help desk- pic.twitter.com/UAKKY4GuOh

Not content with uniting Ireland, Amazon even offered succor to other beleaguered UK nations, responding to a request for Scottish independence by saying: “Thank you for reaching out to us. We’ll be sure to pass your feedback along to the appropriate team.”

Eventually someone at Amazon Support realized the mishap and issued an apology. “We apologise for the error in our colleague’s response. Our Prime Video subscribers in Northern Ireland and the rest of the UK can access and watch the Rugby Autumn Nations Cup on Prime Video as part of their subscription,” the company said.

However, that did little to stop the reactions rolling in, as many informed Amazon that they were expecting a united Ireland, including all 32 counties on the island, to be promptly delivered.

I wanted 32 counties and a PS5 and you’re out of them both. What the hell?

That’s not good customer service. A lot of people are now rightly expecting a united Ireland to be delivered before 6 PM tomorrow. pic.twitter.com/9TDIpFyX7E 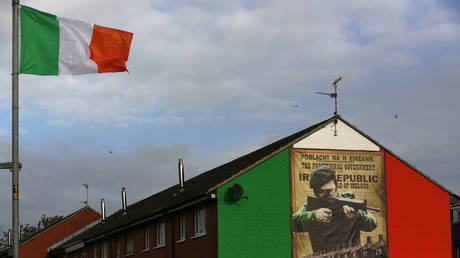 'He broke my orbital bone wit...

Russia to set up new multipurpose...