Sheikh Waseem Bari, a regional leader of Indian Prime Minister Narendra Modi’s BJP party, has been shot dead in the disputed land of Kashmir. Bari’s brother and father were also gunned down, with police blaming “terrorists.”

Militants opened fire on Bari outside his shop in Bandipora, North Kashmir, on Tuesday evening. Bari, along with his brother and father, were killed in the “indiscriminate firing,” Kashmir Zone Police stated.

#Terrorists fired upon BJP worker Wasim Bari at #Bandipora. During indiscrimnate firing Wasim Bari, his father Bashir Ahmad and his brother Umer Bashir got injured and shifted to hospital but unfortunately all the three #succumbed to their injuries. @JmuKmrPolice

The “terrorist” attack took place near a police station, and occurred a month after political leaders in the disputed territory called for increased security, following the murder of a Hindu congresman in the region.

Indian security forces have engaged in a series of bloody clashes with terrorists in Kashmir as of late. Eight militants were killed in two raids last month, with tear gas, smoke grenades and lethal weapons deployed against the militants.

India regularly carries out raids against Islamist insurgents in the area, clearing their camps and busting weapons caches in remote locations. India and its western neighbor Pakistan, which claims the whole of Kashmir as its territory, occasionally engage in cross-border shelling, with both sides blaming each other for starting the decades-old conflict. 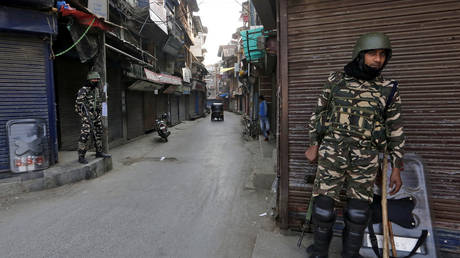