Lebanese group Hezbollah has a “secret arms depot” in residential Beirut, Israeli PM Benjamin Netanyahu claimed in an address to the UN General Assembly, during which he again turned to a PowerPoint, maps, and other visual aids.

“Here’s where the next explosion will take place – right here,” Netanyahu said, as he directed his laser pointer at a large screen, showing the map of the Lebanese capital.

The alleged Hezbollah missile depot is situated near both a gas company and people’s homes, Netanyahu insisted in his speech, which was broadcast from Jerusalem. This year, state leaders refrained from visiting the UN headquarters in New York due to the Covid-19 pandemic.

The PM also showed a photo showing what he said was the entrance to Hezbollah’s secret facility. The group is allied with Israel’s main geopolitical foe, Iran.

“You’ve got to act now, you’ve got to protest this, because if this thing explodes, it’s another tragedy,” Netanyahu said, addressing the people of Lebanon. “You should tell them: ‘Tear these depots down.’”

Tuesday’s presentation continued the trend set by the Israeli PM’s now-iconic UNGA address in 2012, when he used a sign with a huge cartoon bomb on it to illustrate how close he believed Iran was to creating a nuclear weapon.

The Israeli military later added that there were at least three such depots in Beirut that were allegedly being used to make precision-guided missiles, backing the claim with more maps and video clips.

Hezbollah leader Sayyed Hassan Nasrallah rebuffed the Israeli PM’s accusations as “lies.” It was not the first time that Netanyahu had tried to set the Lebanese people against Hezbollah, he pointed out. 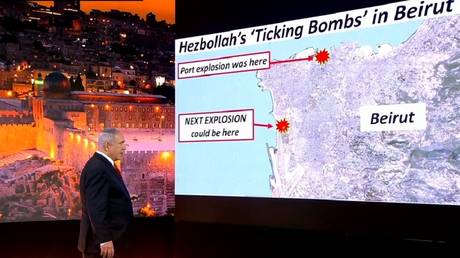