The Berlin Police have confirmed to RT that an investigation into “suspected bodily harm” has been opened after an officer was captured on film throwing an elderly woman to the ground during protests against coronavirus lockdown.

In a statement to RT’s sister channel RT DE, the Berlin Police revealed that the video “is known” to the department and that they have initiated “a corresponding investigation into suspected bodily harm.”

The department refused to release any more information due to the investigation being ongoing.

The video from the anti-Covid-19 lockdown protests on Sunday showed an elderly woman trying to walk past an officer. The officer could then be seen holding the woman by her neck with both hands before throwing her forcefully to the ground, as other protesters confronted him and aided the injured woman.

Other officers in the video could also be seen shoving protesters.

After the clip went viral on social media, Nils Melzer, the United Nations’ special rapporteur on torture, issued a request for further information on the incident.

Roughly 5,000 Germans took part in the protests on Sunday, with around 600 arrested after the demonstrations became chaotic. Several clips showed officers attacking protesters with their fists, batons and pepper spray, and one man was even violently grabbed by police and detained for playing the trumpet.

A police officer was also filmed punching a teenage boy in the face when he was sitting on the floor.

Other elderly people were also caught in violent encounters with the police. One clip showed a woman being pushed over by an officer, while another elderly woman could be seen already laying on the floor, presumably having been pushed over just moments before. 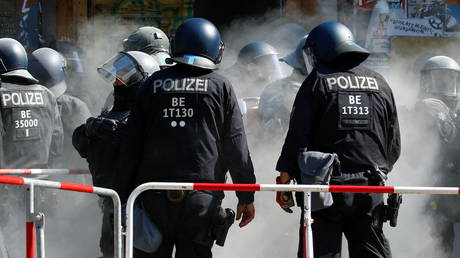