The group of left-wing protesters gathered at the Frankfurt Gate in Berlin’s borough of Friedrichshain on Sunday morning, as part of an annual ceremony honoring Rosa Luxemburg and Karl Liebknecht, who were murdered by right-wing paramilitaries in 1919. With many waving red hammer-and-sickle flags, the demonstrators then marched to Friedrichsfelde cemetery, where the two communist leaders are buried.

Around 3,000 people registered to attend the event, but the Berliner Zeitung, citing a police spokesperson, said far fewer showed up. Although the rally has become a yearly tradition among German socialists, the event appears to have run afoul of Germany’s social distancing measures and ban on public gatherings amid the Covid-19 pandemic. Local media said that a large contingent of officers were at the scene in order to “punish” violators of the Infection Protection Act, which allows the government to enforce mask mandates, limits on gatherings and other measures put in place to stop the spread of the virus.

Eyewitnesses accused the police of using aggressive tactics as they confronted the group. One tweet, which included a photograph of a demonstrator being dragged away, said the police were using pepper spray and that “keeping your distance is impossible.”

According to reports, several arrests were made.

The Berlin Police issued a brief message confirming that there had been isolated arrests, adding that the force had asked some demonstrators to discard Free German Youth (FDJ) flags that they were carrying. The FDJ was the official youth movement of the socialist German Democratic Republic.

Notably, Germany’s left-wing Die Linke party said it would postpone its commemoration of Luxemburg and Liebknecht until March due to the pandemic. 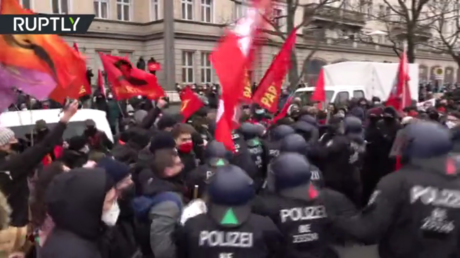 US dollar demise will soon be attr...