Germany is looking at bringing in the UN over Washington’s threats of sanctions against the Russian-led pipeline, saying the US pressure runs contrary to international law.

Klaus Ernst, the chairman of the Bundestag Committee on Economic Affairs and Energy, signaled during an interview with RT Deutsch that it is unacceptable when one country, for example, the United States, prescribes to another sovereign country or the European Union how to resolve the issue of its own energy supply.

The politician said that this “is contrary to any reasonable relationship.” He added that if sanctions were imposed by the United States, it would be a violation of international law.

It is a violation [of the international law] to threaten the country’s sovereignty using extraterritorial sanctions. After all these sanctions do not apply to the United States, they concern the European Union.

Ernst said that the draconian sanctions, that would affect every company contributing to, or involved in, building the Nord Stream 2 pipeline, are an affront to the sovereignty of the EU as a whole – which will draw a response from Brussels. Germany, on its part, does not sit idly.

“The next measure, which we are also discussing, is about raising this issue at the UN level,” Ernst revealed. Other options include “lodging complaints with the relevant [international] courts,” the MP told, adding, “we’ll see what they decide.”

Ernst spoke on the heels of a new threat made by three Republican senators, namely, Ted Cruz, Tom Cotton, and Ron Johnson. The trio compiled a letter for the management of the German port of Mukran, where vessels laying the last remaining stretch of Nord Stream 2 are moored and re-supplied.

The document openly threatened the port – and the surrounding city of Sassnitz – with “crushing legal and economic sanctions, which our government will be mandated to impose.” These “fatal measures” will potentially cut off the city “from the United States commercially and financially,” if it continues to allow in ships building the pipeline.

Still, Germany and Russia – the two major stakeholders in the project – seem determined it will succeed. “In my understanding, there is reason to believe this will be done in the near future,” Russian Foreign Minister Sergey Lavrov said last week, reiterating that Europe, the key beneficiary of the pipeline, should determine its own energy policy.

Nord Stream 2 aims to supply Europe with up to 55 billion cubic meters (bcm) of natural gas per year, on top of the 55 bcm annually supplied through Nord Stream 1. After the project stalled at the final stages due to US sanctions at the end of 2019, Russia had to work to finish the route on its own. It plans to complete the pipeline by the end of the year or in early 2021. 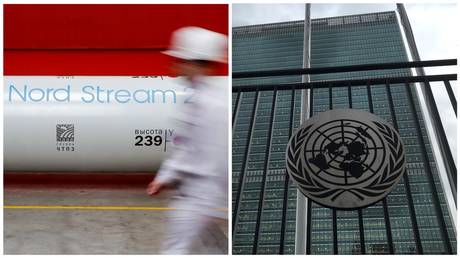