The riots in Belgrade on Tuesday were “political violence,” influenced from abroad, which had little to do with the public’s anger over planned anti-coronavirus measures, Serbian President Aleksandar Vucic said.

Hundreds of people clashed with police and stormed the National Assembly building several hours after it was announced that a curfew will be reinstated in the Serbian capital at the weekend amid a new spike in Covid-19 cases. The unrest left 43 police officers injured, including one with a skull fracture, Vucic said in a televised address as quoted by local media, showing photos of the wounded law enforcers.

He said that the police acted with “dignity” and refrained from using force for as long as possible, but eventually were left with no other choice by the mob. As a result, 17 protesters were hurt and 23 others arrested.

Those responsible for the violence were “members of right-wing organizations,” the president pointed out.

The decent citizens, whose dissatisfaction [with the new curfew] was understandable, withdrew [from the protest] and the extremists took over.

The slogans of the rioters weren’t about Covid-19 at all, but about migrants, 5G networks and Vucic’s upcoming talks with the Prime Minister of the breakaway Kosovo region Avdullah Hoti which they called a “betrayal,” he pointed out.

At the unsanctioned protest last night, “there was all kinds of influence from foreign security services,” Vucic insisted, but provided no further details.

The president called upon citizens to refrain from taking part in street rallies to prevent the further spread of the coronavirus. “There are no free beds in our hospitals,” he warned, but promised that new medical facilities will be opened. Serbia has so far recorded more than 17,000 cases of Covid-19 with over 340 deaths.

The plans to reinstate the curfew in Belgrade at the weekend have been shelved, but the president said that he himself was in favor of announcing a new lockdown sometime next week. The decision on the restrictions is to be made by the government on Thursday. 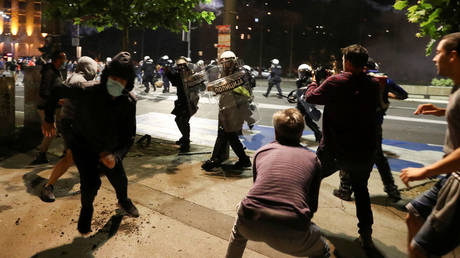