The Belgian parliament has passed a non-binding resolution calling on the government to lead the way in implementing “counter-measures” against Israel if it goes ahead with its planned annexation of parts of the West Bank.

The resolution, passed on Friday morning with an overwhelming majority, urges the federal government to take steps to prevent the annexation of Palestinian territories. It says the Belgian government should “play a leading role” in drawing up a list of “effective countermeasures intended to respond proportionately” to Israel, if it proceeds with the plan.

The document also calls for Europe-wide punitive measures to potentially be taken against Prime Minister Benjamin Netanyahu’s government. If there is no agreement on a response at the European level, however, Belgium should seek to form a “coalition between like-minded member states” to work out a common response, the resolution says.

Many EU countries have expressed strong opposition to Israel’s intention to annex up to 30 percent of the West Bank from July 1, yet the bloc needs a consensus of all 27 members to impose sanctions.

Last month, French Foreign Minister Jean-Yves Le Drian said he was working with EU partners on a potential “reprisal” against Israel. On Wednesday, more than 1,000 lawmakers from 25 European countries signed a statement opposing any unilateral Israeli annexation of the West Bank. However, the Belgian parliament is the first in the EU to officially call for sanctions over the planned annexation.

Palestinian Foreign Minister Riyad al-Maliki welcomed the Belgian parliament’s resolution, saying that it came at a time of escalating international rejection of Israel’s plans. “We see every day indications of eroding support for Israel and the immunity that it has enjoyed for decades despite its continued violations,” al-Maliki said on Friday.

However, Israel’s ambassador to Belgium, Emmanuel Nahshon, condemned the move, arguing that Belgium should encourage the Palestinians to return to peaceful negotiations instead of applying “undue” pressure on Israel, the Times of Israel reports.

Netanyahu has vowed to annex areas of the West Bank, where more than 420,000 Jewish settlers live as part of the US’ Vision for Peace initiative, yet the White House said on Thursday that it had not made a final decision on whether to fully back the plans.

The annexation would make official the de facto state of affairs in the Jewish-only settlements. The plan has been condemned by United Nations human-rights experts, who called it “unlawful” and “21st-century apartheid.” 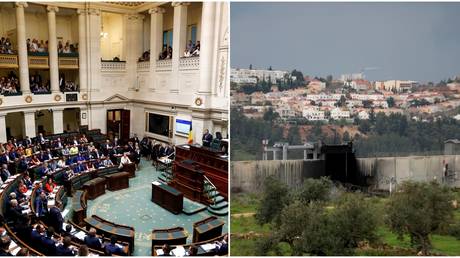