More than 2,000 people who were detained during mass protests over the contested presidential elections in Belarus over recent days have been released, the country’s Interior Ministry has said.

However, around 4,700 people are still being held by the country’s law enforcement.

In the Belarusian capital city of Minsk, the release of protesters began early in the morning, attracting a crowds of supporters to the detention center. The crackdown on protests had triggered widespread allegations of torture behind bars, while some of the detained said they were beaten up by riot police, but not mistreated in detention.

On Thursday, Belarusian Interior Minister Yuri Karayev admitted that law enforcement might have been a little too zealous while dispersing the protests. He issued an apology to “random people who got caught up in the dispersal.” He maintained, however, that riot police repeatedly came under attack by protesters. Multiple videos available online suggest law enforcers were quite eager to use rubber bullets, tear gas and stun grenades, while chasing and beating up people in residential areas of Minsk.

The protests followed presidential elections held last Sunday, which the opposition maintains were falsified. The authorities insist that the vote was fair, while President Aleksandr Lukashenko claimed the protests were incited from abroad in an attempt to overthrow him.

According to official figures, Belarus’ long-term leader secured a solid win, getting just over 80 percent of votes. His closest competitor, Svetlana Tikhanovskaya, who claimed to have won the election, got a mere 10 percent of votes.

Tikhanovskaya fled to Lithuania shortly after the election, and is now urging her supporters to stick to “legal, non-violent” action, calling for “bloodshed” in the streets to stop. The candidate maintains she won the poll, citing “copies of polling station protocols,” and has demanded recount. 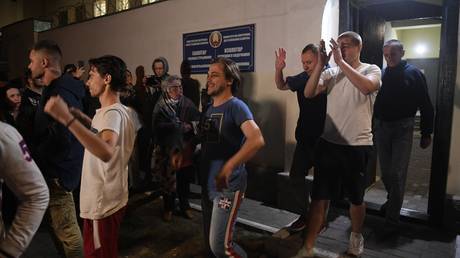