Opposition leader Svetlana Tikhanovskaya has said she is ready and willing to be the interim leader of Belarus if the country holds new elections, amid growing political turmoil in the country.

Tikhanovskaya, who fled to Lithuania last week, said in a video message that she was prepared to take the reins in Minsk should the nation void President Alexander Lukashenko’s election victory and return to the voting booth.

“I am ready to take responsibility and act as a national leader during this period,” Tikhanovskaya said, adding that opposition activists, who have been protesting for a week, should continue to push for change.

The opposition claims that the August 9 presidential election, which gave Lukashenko around 80 percent of the vote, was fraudulent. Demonstrations have erupted in Minsk and several other cities against the contested results, with clashes between protesters and police leading to at least one death.

The EU and the United States have refused to accept Lukashenko’s victory, with both Brussels and Washington threatening sanctions.

Lukashenko has blamed the unrest in his country on foreign meddling and held military drills to counter NATO exercises being carried out in neighboring Poland and Lithuania. 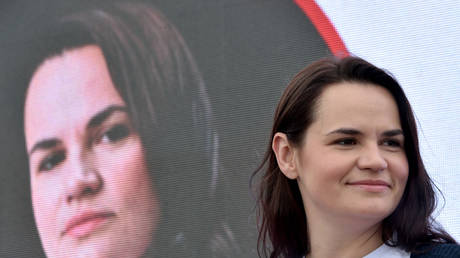