Close
Trending News
HomeWorldBelarus’ Lukashenko says he is being targeted by ‘color revolution’, seeks to join forces with Putin

Belarus’ Lukashenko says he is being targeted by ‘color revolution’, seeks to join forces with Putin

Belarus’ Lukashenko says he is being targeted by ‘color revolution’, seeks to join forces with Putin

Mass anti-government protests in Belarus are actually a “color revolution” in action, and Russia may be the next target if the country fails to halt its progress, President Alexander Lukashenko has claimed.

Lukashenko, whose reelection for a sixth term last Sunday sparked mass protests over an alleged rigging of the vote, believes his detractors are unwitting agents of foreign puppeteers and need to be stopped.

“Don’t you lull us with [talk about] peaceful action and demonstrations. We can see what is happening deep down,” the Belarus leader said on Saturday at a government meeting, as cited by local media.

We have read the guidelines on how to conduct color revolutions.

The president added that he should talk to Russian President Vladimir Putin, because “this threat is not against Belarus alone.”

…Defending Belarus today is nothing less than defending our entire space, the Union State [of Belarus and Russia], and an example for others… If Belarusians can’t stand, the wave will flow there.

The proposed conversation with President Putin materialized later in the day. According to a Kremlin readout of the phone call, the two leaders expressed hope that Belarus’ ongoing problems “will be solved soon” and that “destructive forces” wouldn’t capitalize on them to hurt bilateral relations.

Lukashenko is facing increasing pressure from the public after his government launched a police crackdown on the opposition in the wake of last week’s vote. The approach backfired after evidence of police brutality fueled discontent and prompted more people to take the streets and demand the president’s resignation.

The demonstrations continued on Saturday, with thousands gathering in central Minsk to commemorate a protester who died amid the crackdown.

Belarus police said that Aleksandr Traykovskiy died after an improvised explosive device went off in his hand before he could throw it at officers. Opposition forces question this version of events, however, suspecting instead that he may have been fatally injured by law enforcement. 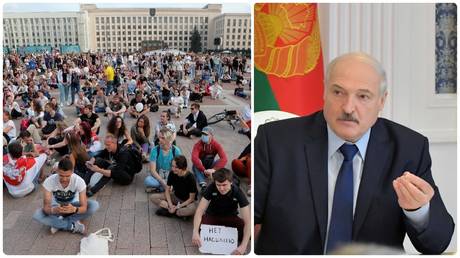