A protester who was killed in unclear circumstances during clashes with police in Belarus, might have been hit by a non-lethal round, the country’s interior minister claimed, urging the public to wait for investigation results.

Alexander Taraikovsky, a 34-year-old demonstrator who was killed during protests in the Belarusian capital city of Minsk on Monday, might have come under fire from non-lethal weaponry, Interior Minister Yuri Karaev said on Sunday.

“Maybe he was shot with non-lethal weapons. I don’t know yet, I’m not an investigator,” Karaev told local media before diverting attention to months-long protests and unrest in the United States.

He died. How many people died in the riots in America?

The official insisted that the deceased protester could only have come under rubber-bullet fire and that law enforcement used only non-lethal weaponry during the clashes.

The death of Taraikovsky added more fuel to the protests that erupted following presidential elections held in Belarus on August 9. His death was squarely blamed on law enforcement, though investigations into the fatal incident are ongoing.

Initially, authorities claimed that the protester was critically injured by an improvised explosive device he was carrying, yet that appears not to be the case.

Graphic videos of the incident show Taraikovsky approaching a line of heavily armed law enforcement officers but seemingly with nothing in his hands. Several explosions, possibly from protester-thrown fireworks can be seen in the videos, as well as a large flash coming from the police line.

The protester is then seen with a large bloodied wound to his chest and collapses to the ground shortly. Still, available footage does not show how exactly he received the fatal wound. 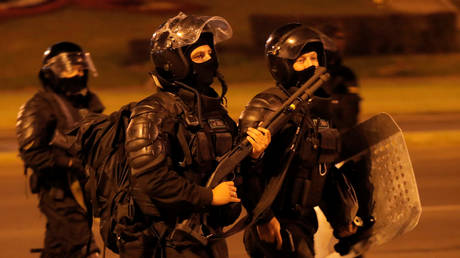