The massive blast that destroyed a huge swathe of Beirut in August was one of the biggest non-nuclear explosions in history, releasing enough energy to power more than 100 homes for a year, new research has found.

The devastating detonation was the result of the accidental ignition of approximately 2,750 tonnes of improperly stored ammonium nitrate at the port in the Lebanese capital. It resulted in at least 200 deaths and more than 6,000 injuries.

New research from a team of experts at the University of Sheffield has revealed that the blast was the equivalent of up to 1,100 tons of TNT, making it one of the largest non-nuclear explosions ever recorded.

The scientists arrived at their conclusions by studying a trove of videos that were posted on social media and mapping how the shockwave ripped through the city.

In the blink of an eye the explosion unleashed the equivalent of around 1GWh of energy. This amounts to the hourly energy generated by three million solar panels.

The study found that the explosion was around 1/20th of the size of the atomic bomb that the United States dropped on the Japanese city of Hiroshima in August 1945. That bombing resulted in over 140,000 deaths, with tens of thousands of the victims instantly killed by the blast and subsequent firestorm.

The engineers hope that their study could be used by first responders to help predict injuries and structural damage in future emergency situations.

Dr. Sam Rigby, senior lecturer in blast and impact engineering, said: “By understanding more about the power of large scale accidental explosions like the one that occurred in Beirut, we can develop more accurate predictions of how different buildings will be affected, and the types of injuries there are likely to be at different distances from the blast.” 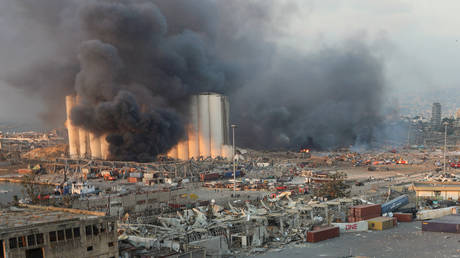