Washington should immediately correct its mistake and stop persisting with escalation against Chinese journalists working in the United States, Beijing has warned.

No Chinese journalist in the US has been granted a visa extension since Washington limited their stay to 90 days, with an option to extend, on May 8, Chinese Foreign Ministry spokesman Zhao Lijian told reporters on Monday.

China will take a necessary and legitimate response to safeguard its rights, Zhao said, commenting on Washington’s “wrong actions.” It was not immediately clear what retaliation China might consider.

The spokesman cited “the Cold War mentality and ideological biases” while saying that Washington’s actions have seriously interrupted Chinese journalists reporting in the US, harmed the Chinese media’s reputation and normal people-to-people exchange.

The Trump administration announced in February that it would begin treating five major Chinese state-run media entities with US operations the same as foreign embassies. The next month, the number of Chinese journalists allowed to work at the US offices of Chinese media was slashed from 160 to 100.

In June, the US State Department added four more Chinese media outlets to those it treats as foreign embassies.

In response, China has revoked the press credentials for American journalists from three newspapers.

Some Chinese analysts have urged Beijing to impose visa restrictions on American journalists in the Hong Kong Special Administrative Region as part of countermeasures. 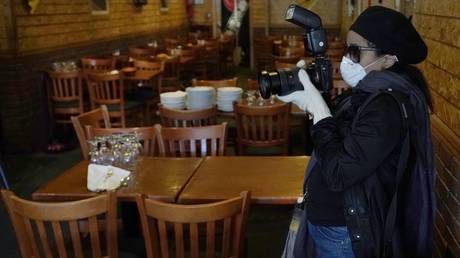