The Chinese foreign ministry has issued a stern rebuke after Philippines’ foreign minister ordered Beijing’s vessels to “get the f**k out” of Manila’s waters. Beijing says Huangyan Island is Chinese territory.

Speaking on Tuesday, Chinese foreign ministry spokesman Wang Wenbin said that the Huangyan Island (known in Philippines as Panatag Shoal) and the nearby sea were under China’s jurisdiction and urged Manila to respect Beijing’s sovereignty over the unpopulated landmass.

Wang stated that microphone diplomacy cannot change the facts that this island belongs to China, after Philippines’ Secretary of Foreign Affairs Teodoro Locsin told Beijing, in a tweet, to “get the f**k out” of what Manila considers to be its territory.

China’s spokesman said it is hoped that the relevant people, a probable reference to Locsin, “will comply with the basic etiquette and identity when making their remarks,” when asked by a journalist about the “dirty” language used by Manila.

Wang said that Beijing also hopes that such differences and contradictions between the two countries on individual issues will not impact friendship and cooperation. “China has always and will continue to work with the Philippines to properly resolve differences and promote cooperation through friendly consultations and continue to provide assistance to the Philippines within its capacity in fighting the epidemic and restoring the economy,” the spokesman noted.

Wang’s comment came after Locsin’s fiery remarks on Twitter on Monday. “China, my friend, how politely can I put it? Let me see… O…GET THE F**K OUT. What are you doing to our friendship? You. Not us. We’re trying. You. You’re like an ugly oaf forcing your attentions on a handsome guy who wants to be a friend; not to father a Chinese province,” the foreign secretary tweeted.

Locsin’s tweet came after a statement by his country’s foreign affairs department, which protested the “illegal presence” of Chinese ships in parts of the South China Sea, called the Luzon Sea in the Philippines and recognized by the Hague court as belonging to Manila. Huangyan Island, also known as the Scarborough Shoal, sits about 230 kilometers from the Philippines and 650 kilometers from the nearest part of China.

Recently, Manila informed Beijing of its discontent after 220 Chinese vessels moored in the Julian Felipe Reef, also known as the Whitsun Reef, citing bad weather, but did not leave when requested. Manila says the reef falls within its 200 nautical mile exclusive economic zone (EEZ).

Islands and reefs within the South China Sea are hotly contested between China, the Philippines, Vietnam, Malaysia, Indonesia, Taiwan and Brunei. 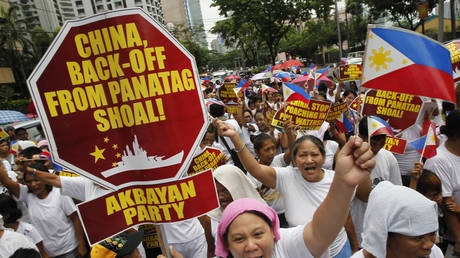