American warships undermine peace and stability in the South China Sea, the Chinese Foreign Ministry’s spokesperson says. The US Navy earlier deployed two aircraft carriers on a training mission in the region.

The actions of the United States are intended to provoke conflicts in the already contentious waters, as well as to “promote the militarization, undermine peace and stability in the South China Sea,” Zhao said.

“The international community and especially the nations in the region see it clearly.”

The US Navy’s Japan-based Seventh Fleet public affairs office earlier said that it had “celebrated Independence Day” by dispatching the nuclear-powered aircraft carriers USS Nimitz and USS Ronald Reagan, as well as escorting ships, to the South China Sea. The groups performed several tactical exercises during their voyage.

The US frequently sends warships on so-called ‘freedom of navigation’ missions in the area, where several nations, including China, have territorial disputes. US Navy officials say the voyages are necessary to ensure peace in the region and to deter China from intimidating its neighbors.

Beijing, however, has repeatedly argued that the operations raise tensions in the South China Sea, and has accused the American ships of sailing too close to China’s maritime border. 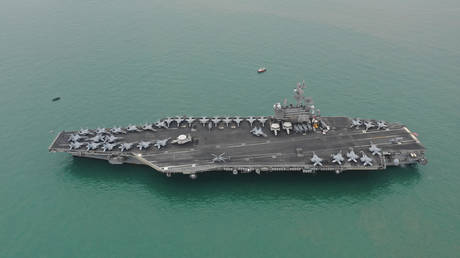