China has hit back at US Secretary of State Mike Pompeo, who accused it of wanting to create an “empire” in the South China Sea. Washington only disrupts peace in the region, Beijing said.

The US has been “the troublemaker and the disruptor of peace and stability in the region,” China’s Foreign Ministry Spokesperson Zhao Lijian told reporters.

“The international community sees this very clearly,” he said.

Zhao was reacting to remarks by US Secretary of State Mike Pompeo, who earlier accused Beijing of “bullying” its neighbors and trying to create “a maritime empire” in the South China Sea. Numerous countries, including China, have long-standing territorial disputes in the area.

Zhao said that Beijing has never sought to establish “an empire” in the region. However, he argued that China’s territorial claims and interests “have sufficient historical and legal basis,” and are legal under international law.

Earlier this month, the Pentagon deployed a carrier strike group with aircraft carriers USS Nimitz and USS Ronald Reagan to conduct tactical exercises in the region. The US insists that the show of force is necessary to ensure the freedom of navigation and to deter Beijing from threatening Taiwan and other neighbors.

China, meanwhile, argues that such maneuvers are provocative and stoke tensions in the South China Sea. 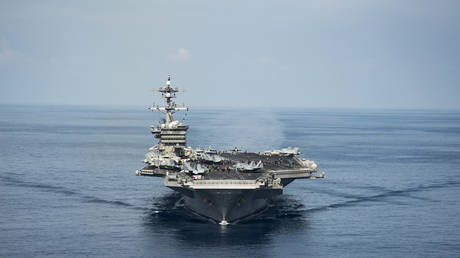