Beijing says Chinese military won’t ‘dance to tune’ of US, urges Washington to quit policy of ‘anxiety and paranoia’

Beijing says Chinese military won’t ‘dance to tune’ of US, urges Washington to quit policy of ‘anxiety and paranoia’

China’s military won’t bend to US posturing in the region, Beijing has warned, adding that Washington should abandon its current foreign policy trajectory and seek mutual cooperation.

Beijing’s relationship with the United States has become “unusually severe and complicated,” Senior Colonel Wu Qian, the spokesman for China’s Ministry of National Defense, said on Thursday, describing bilateral ties as being at a low point. The two nations established formal relations in the 1970s.

“China will not dance to the US’ tune, nor will we acquiesce to its reckless behavior,” the spokesman said, warning that China will take “forceful measures” to safeguard its national interests.

He stressed the importance of maintaining communication channels between the two nations’ militaries and called for an increase in dialogue to avoid misunderstandings.

Washington should rethink its “strategic vision” in regards to China and approach the Asian power “with rationality and an open mind, and pull itself out of the swamp of anxiety and paranoia,” Wu suggested.

The comments come hours after China’s foreign ministry slammed the US for allegedly trespassing in a no-fly zone during Chinese military drills. The ministry said the presence of the U-2 spy plane in the area was a “naked provocation” and could have caused an “unexpected accident.” The US military insisted that the reconnaissance plane had not violated any international agreements or rules. 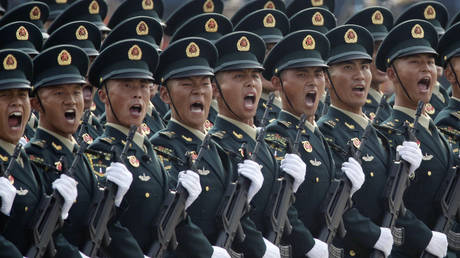