Close
Trending News
HomeWorldBeijing orders AP, CBS & other US outlets to submit information on China operations in tit-for-tat media war with US

Beijing orders AP, CBS & other US outlets to submit information on China operations in tit-for-tat media war with US

Beijing orders AP, CBS & other US outlets to submit information on China operations in tit-for-tat media war with US

China’s Foreign Ministry has ordered US news organizations to submit information about their operations inside the country within seven days, in what it says is a self-defense move against Washington’s restrictions on its media.

The Associated Press (AP), CBS News, National Public Radio (NPR) and United Press International (UPI) media outlets are to detail information about their staff, operations and property in China. The announcement comes in response to US restrictions on Chinese media, and the measure is taken purely in self-defense, a ministry spokesperson said, according to the Global Times.

“We urge the US to immediately change course, correct its error, and desist in the political suppression and unreasonable restriction of Chinese media,” said spokesman Zhao Lijian.

The US State Department announced restrictions on five Chinese media outlets in February, alleging they were being used to spread propaganda. It added four others to the list in June, declaring them “foreign missions” and saying they are “effectively controlled” by the Chinese government. The targeted outlets include Global Times, People’s Daily and China Central Television.

The Chinese outlets targeted by Washington are also required to report details about their employees and real estate transactions in the US. The State Department put a limit on the number of Chinese nationals the organizations could employ in March, meaning some had to fire staff members. The restrictions on employee numbers came after China said it would revoke the credentials of journalists from the New York Times, the Wall Street Journal and the Washington Post in March.

Tensions between the two nations have become further inflamed amidst the coronavirus pandemic, which the US has blamed on China, and anti-Beijing protests in Hong Kong, which are backed by the West.

The US said it was limiting the number of Chinese nationals allowed to work in March because of China’s “long-standing intimidation and harassment of journalists.” Chinese media has since accused the US of hypocrisy over its support for Hong Kong protests in light of its own violent response to Black Lives Matter protests sparked after the death of George Floyd at the hands of the police. 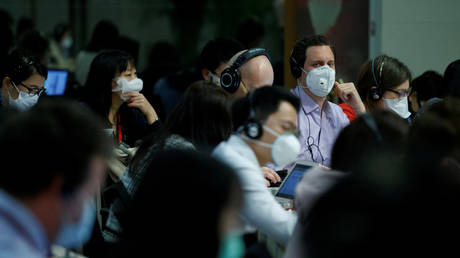