China has become the 170th country to join the COVAX vaccine facility, which supports equitable access to Covid-19 vaccines to both rich and poor countries.

“China just signed an agreement with Gavi, the vaccine alliance, officially joining COVAX,” Department of Foreign Affairs Spokesperson Hua Chunying tweeted on Friday. She said Beijing will “uphold the concept of a shared community of health for all.”

The coronavirus pandemic still poses a threat to people in all countries, the spokesperson noted, adding that “China continues to focus on ensuring that developing countries have equal access to appropriate, safe and effective vaccines.”

Beijing decided to join COVAX despite the fact that it’s already “leading the world with several vaccines at advanced stages of R&D and with ample production capacity,” Hua added, and the move shows Beijing accommodates the interests of other countries, she explained.

China will be procuring vaccines via the global COVAX program for one percent of its population.

The COVAX program, co-led by the World Health Organization (WHO), vaccine alliance Gavi and the Coalition for Epidemic Preparedness and Innovations, aims to deliver at least two billion doses of vaccine by the end of 2021, and to give 20 percent of each country’s most vulnerable population a vaccine. The scheme would ensure vaccines for “some people in all countries and not all people in some countries,” according to the head of the World Health Organization (WHO) Tedros Adhanom.

The international Gavi vaccine alliance commented on China’s decision to join the program, saying it “gives even more momentum to our efforts to ensure global, equitable access to Covid-19 vaccines.”

In May this year, President Xi Jinping said China will provide $2 billion over two years to help other countries respond to the impact of the pandemic, which originated in China’s Wuhan.

Some nations, including the United States, chose to secure future supplies of vaccines through bilateral deals, prompting accusations of selfish behavior. In September, the Trump administration announced it won’t join the COVAX program.

Russia, which earlier this year became the first country to register a coronavirus vaccine earlier, is also absent from the COVAX ranks. 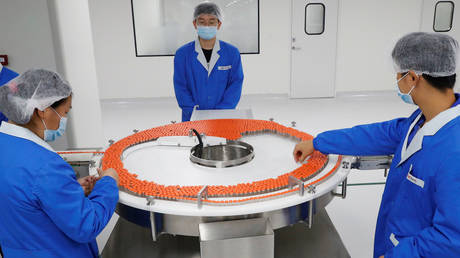