Beijing hits out at Pope, says remarks about “persecuted” Uighurs are groundless

Beijing hits out at Pope, says remarks about “persecuted” Uighurs are groundless

The Chinese foreign ministry has attacked the Pope after he shared his thoughts on the persecuted peoples of this world, a list which included the Uighur people, who largely reside in Northwest China.

Zhao Lijian, China’s foreign ministry spokesman, hit out at Pope Francis on Tuesday after he made “groundless” accusations against China by suggesting that the Uighur people are “persecuted.”

In his new book entitled “Let Us Dream: The Path to A Better Future,” the head of the Catholic Church says: “I think often of persecuted peoples: the Rohingya, the poor Uighurs, the Yazidi.”

Comments from the book, which is expected to be published in December, have provoked the ire of Beijing.

Zhao told the media in a daily briefing that “the remarks by Pope Francis are groundless… the Chinese government has always protected the legal rights of ethnic minorities equally.”

It was the first time that the Pope has called the Uighurs a “persecuted” people despite calls from human rights groups for many years.

Beijing has repeatedly come under fire from the west for its human rights record and its treatment of the Uighurs, a Turkic-speaking Muslim population native to the Xinjiang province in Northwest China.

Beijing has been accused of detaining up to one million Uighurs in internment camps in Xinjiang, which China terms “vocational training centers.”

China has denied any wrongdoing and has previously claimed the Uighurs live in “peaceful and harmonious coexistence with other ethnic groups.” 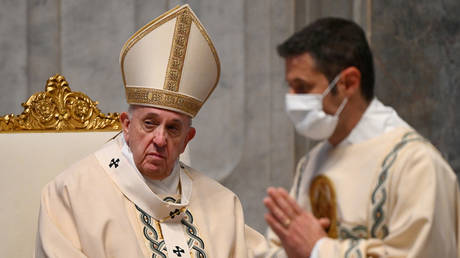 Trump tries to corner Beijing… but...