In its coverage of the Belarus protests, the BBC spoke to a Polish photojournalist who was detained and allegedly tortured by police. However, it didn’t mention that he is a notable extreme right figure, with links to neo-Nazis.

As protests in the Belarusian capital of Minsk after the controversial re-election of Alexander Lukashenko were marked with violence last week, Witold Dobrowolski was one of several thousand arrested. Detained for three days, Dobrowolski was released on Thursday after being brutally beaten and “tortured” by his captors in what he called a “gulag.”

Battered and bruised, Dobrowolski told his story to the BBC, in a video segment that described him as a “photojournalist.” However, there seems to be a few details that the BBC neglected to mention.

Hello @BBCWorld, I would like to ask why you are interviewing a Polish neo-Nazi about the situation in Belarus? pic.twitter.com/IUpqXYdO03

For example, while Dobrowolski is an accomplished photographer – his coverage of protests in Hong Kong won him a Grand Press Photo award in his home country, he has often blurred the line between observer and participant. In Ukraine, he embedded with neo-Nazi Azov batallion paramilitaries, whose videos he still shares on Twitter. Some of these Azov members were seen on the streets in Hong Kong late last year, relatively at the same time as Dobrowolski.

As Dobrowolski told the story of his capture to Poland’s WP news site, he was asked about his links to Azov, and whether he could have been watched by Belarusian authorities. Dobrowolski said his work in Ukraine was “purely journalistic,” and his capture in Minsk was part of a broader “round-up.”

It turns out, Dobrowolski’s connections with the European far right go deeper than embedding with the Azovs. He’s been photographed armed and in paramilitary uniform, and spoke at a conference of Ukrainian ultra-nationalists in 2017. Furthermore, he contributed articles to ‘Szturm’, a Polish extreme-right magazine that features interviews with prominent nationalists, reviews of white power music, and articles on Nazi history and “the Jewish question.”

Hey @BBCWorld, is this normal for a “photojournalist” or has someone fundamentally failed to do due diligence? pic.twitter.com/YIPctAoLeJ

Dobrowolski’s political opinions don’t necessarily invalidate his experience in Minsk, or the merit of the photos he takes. Yet one would expect a major news outlet like the BBC to steer clear of potential controversy, particularly controversy with racial overtones. However, it seems that Britain’s public service broadcaster is more concerned with finding any and every anti-Lukashenko voice it can than vetting these voices first.

The BBC wasn’t the only outlet that got in touch with Dobrowolski. CNN’s Alisha Ebrahimji reached out to the Polish reporter shortly before his arrest and detention, while Italian newspaper La Repubblica’s Andrea Tarquini requested an interview with him after his release. 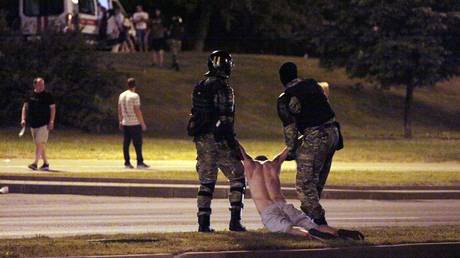