Mysterious British street artist Banksy has released a rare video of a man – presumably himself – painting rats on the London Underground. The trademark rodents are pictured struggling with protective face masks.

The video, showing the making of a work dubbed ‘If You Don’t Mask, You Don’t Get,’ was shared on Banksy’s Instagram account on Tuesday. The work features a number of the artist’s iconic rats, engaging in coronavirus-era activities.

The graffiti was painted by a man disguised as an emergency worker seemingly disinfecting the Tube. Instead of cleaning the space, however, he spray-painted images of the rodents playing around with face masks, with one of them even using the protective face covering as a parachute. One mask-less rat was depicted sneezing all over the carriage, while another painted Banksy’s tag with a bottle of anti-bacterial gel.

At the end of the video, the words “I get lockdown” are shown on the side of a station wall, followed by “but I get up again” on the train’s doors, with Chumbawamba’s 1997 song ‘Tubthumping’ playing in the background.

Rats are recurring characters in Banksy’s works, as he often paints the rodents engaging in various activities. His early works, which appeared on Tube trains years ago, predominantly featured rats as well as monkeys. 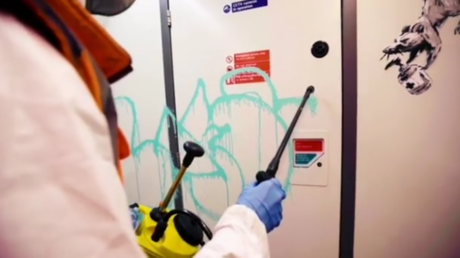